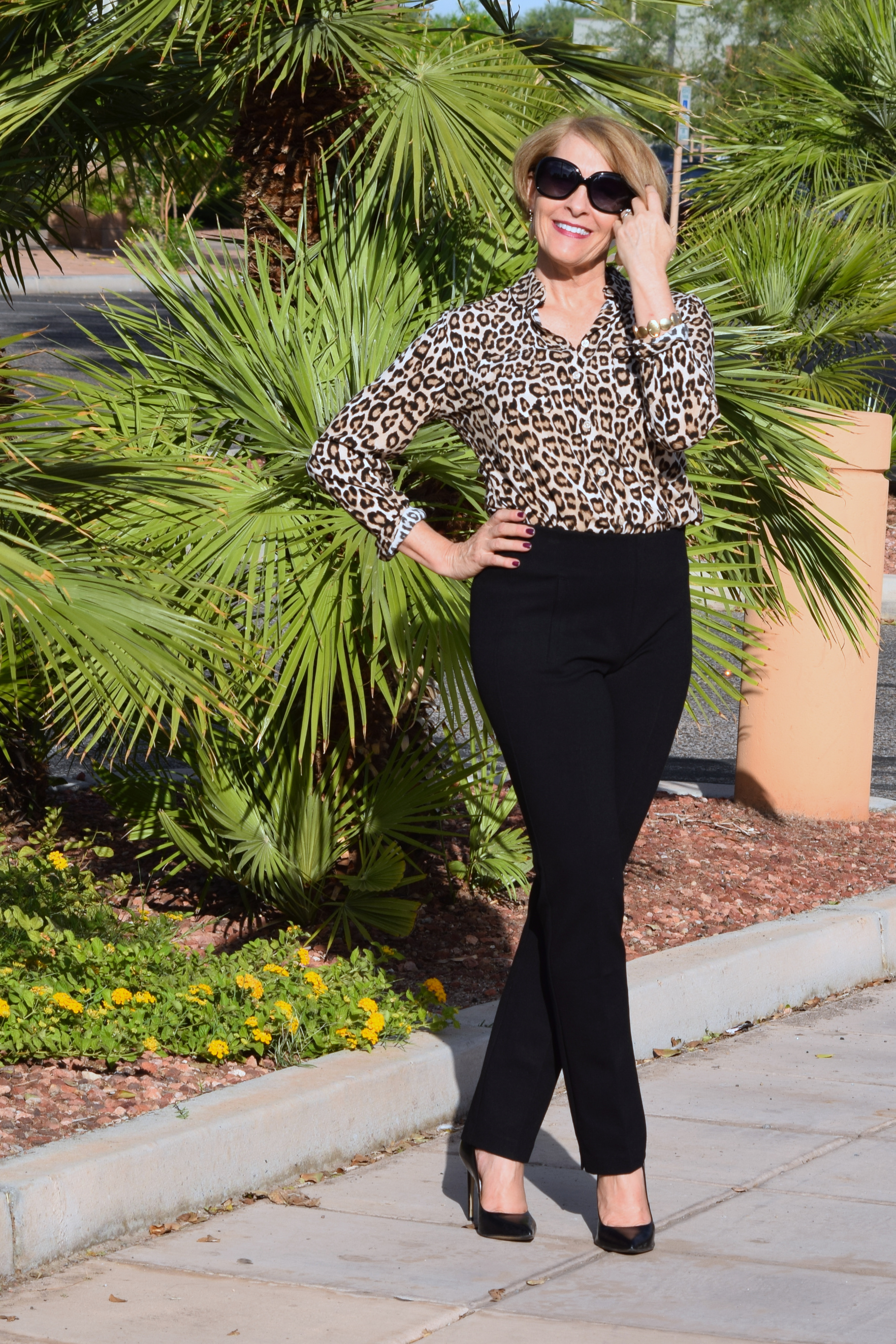 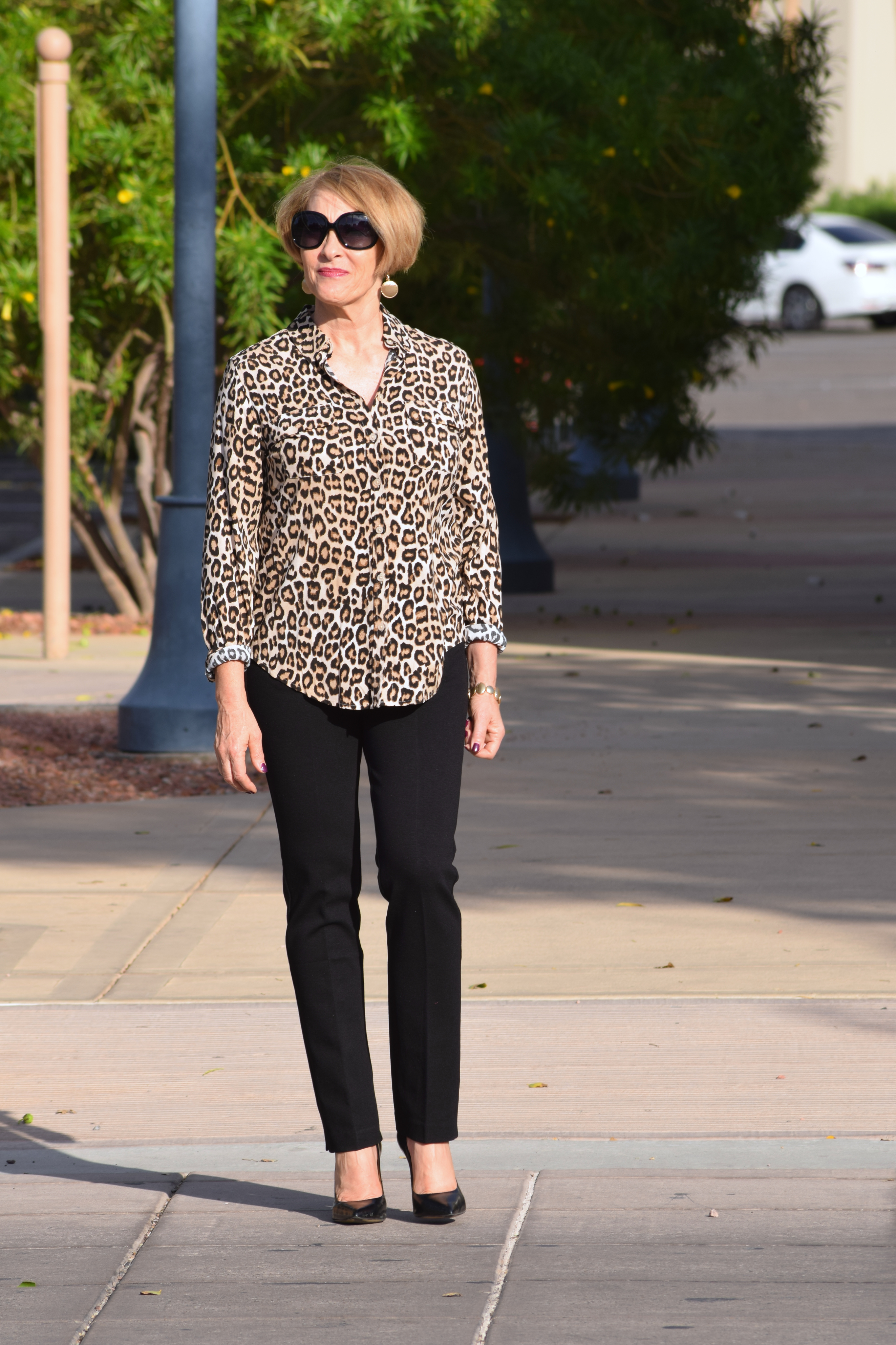 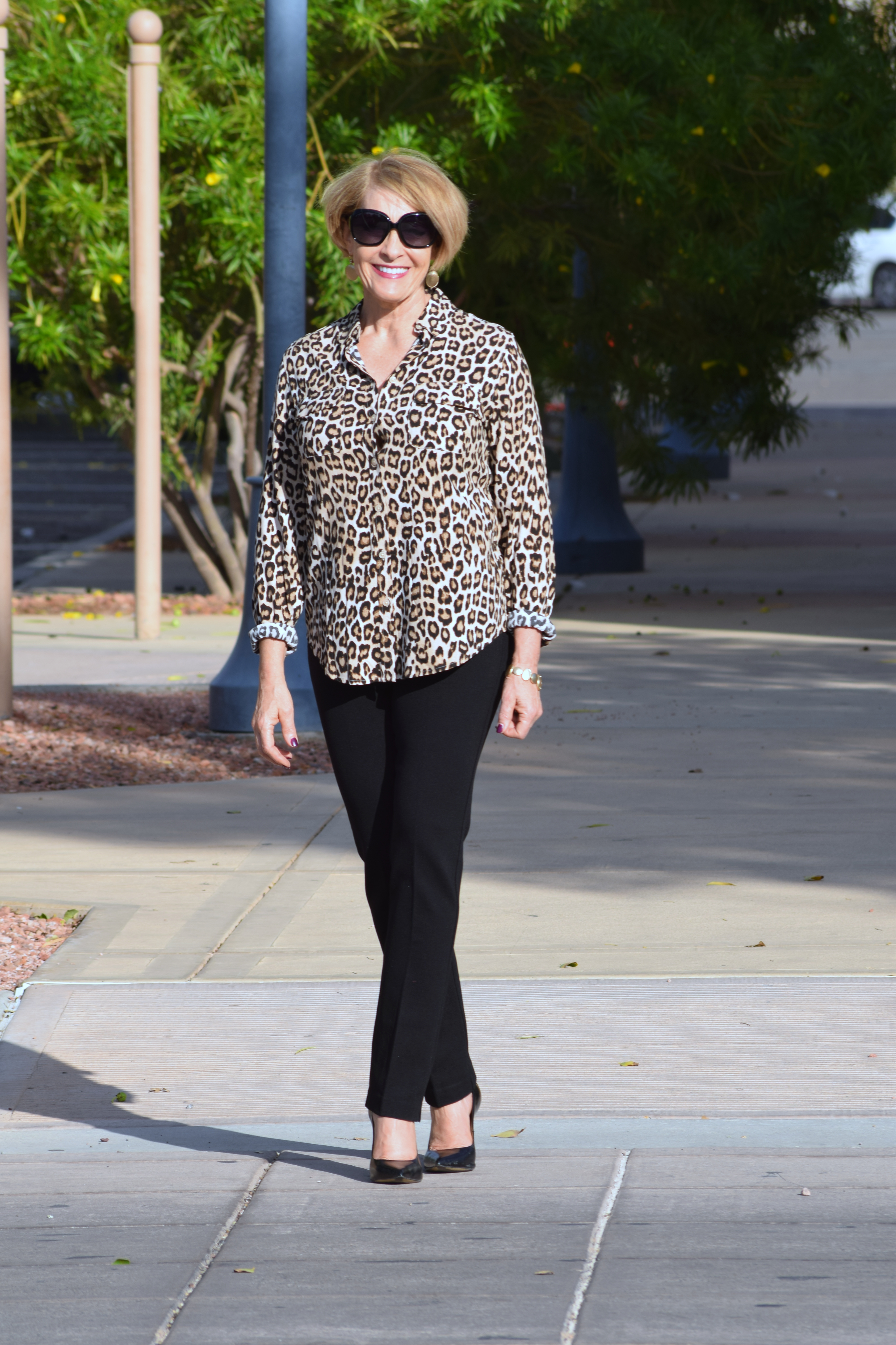 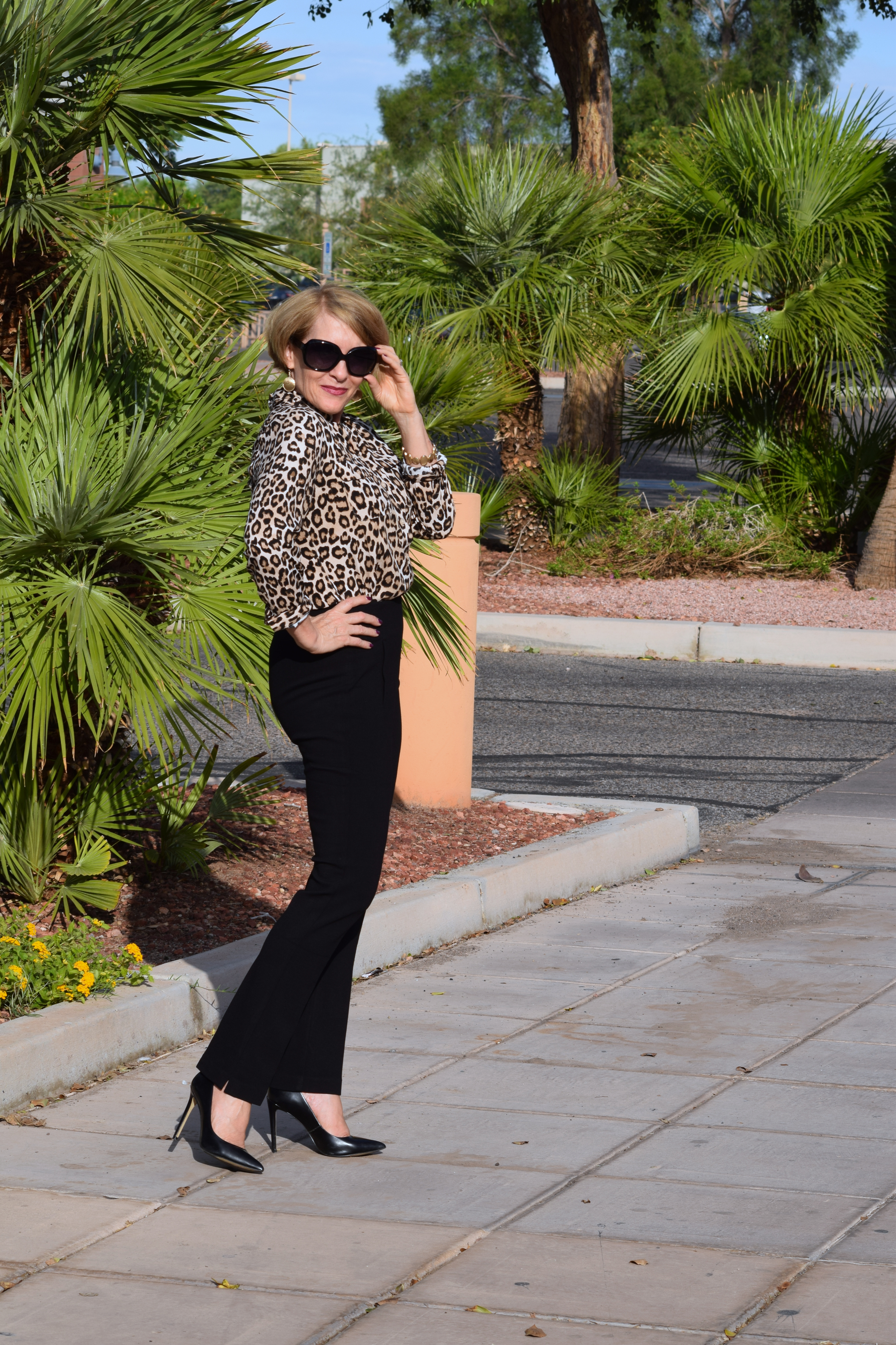 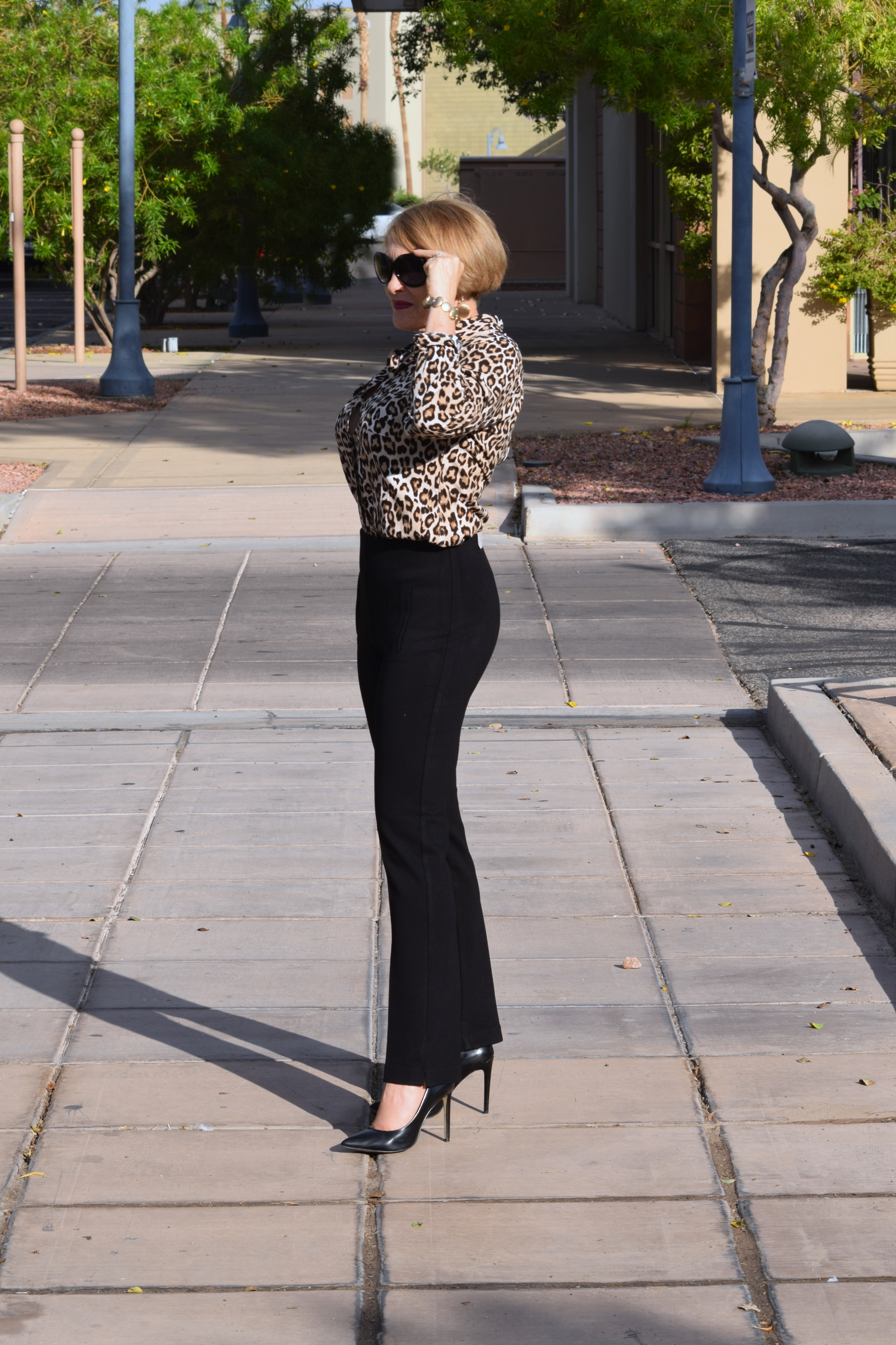 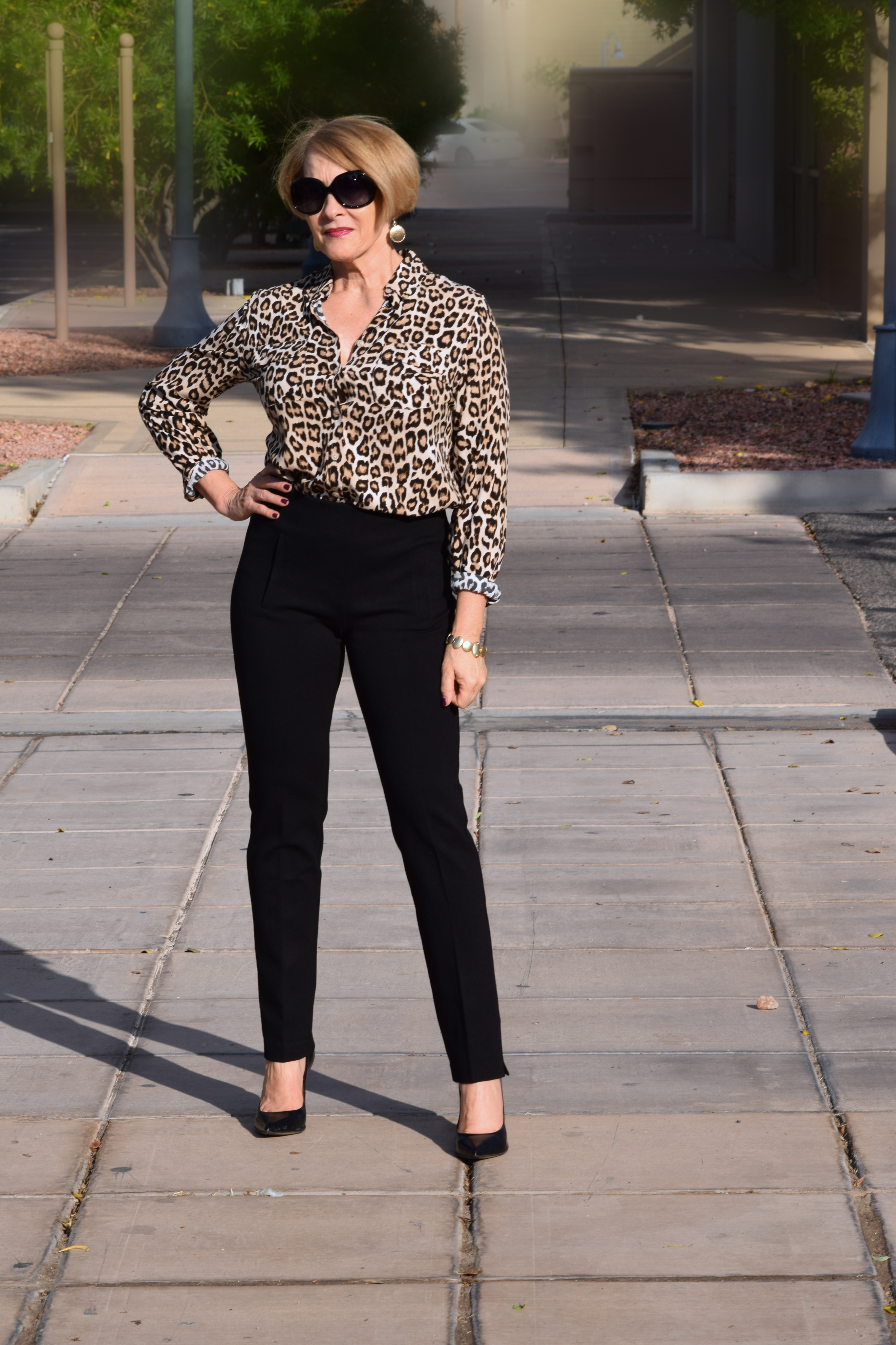 I know what you’re thinking. I thought the same thing. Leopard print is too much for the office. When I combined a leopard shirt and black slacks and ralized I had tamed the wild beast. The trick is to keep everything tailored. The sleek lines are sophisticated so you don’t look like you’re heading straight to the clubs after work. Not that we’d necessarily do that, but we certainly don’t want to look like we do when we’re at work!

If this is a little too tailored for you, try the untucked version.  I’ve shown both because sometimes we want a slightly relaxed look.  It’s still tailored, still office appropriate, but adds a little length to a shorter torso.  Would you agree?

After I wrote the title for this post, it spoke to me in ways far beyond clothing.  May I get real for a minute?  I have a wild beast or two (or twenty) to tame.  Most of my beasts come in the form of thoughts.  At times I’ve had some pretty harsh self-talk.  Even though I’ve discussed self love here more than once, it’s as much a work in progress for me as it is for anyone else.  Maybe more so because I know better.  But I keep plugging away.  It’s honestly a love/hate relationship.  Some days I love myself, some days not so much.

Another beast I deal with constrantly is comparison.  I compare my progress to others.  I compare the way I’m aging to others.  And the shape I’m in, the wrinkles I have, etc.  Of course I suffer in the comparisons, and I’ve realized the root of it all is jealousy.  Such an ugly trait.  But jealously comes from that initial issue of self judgment.  Can I pull my head out of my backside and get over it?  I’d like to think I’ve gotten wiser over the years, but this little beast still plagues me.  Grrr.

Meanwhile, I can always work on improvement.  Rather than working toward a standard I can’t attain I can work toward a better me, but it needs to be with a better attitude.  I am wise enough to know I can’t do that alone.  I’ll leave you with this: of all the Hall of Fame speeches I’ve heard over the years, I really remember only the one given by Michael Irvin.  He talked about his struggles, but it was his response to those struggles that stuck with me.  In his words, “Look up, get up, and never give up.”  And that’s how to tame those inner beast.

I receive commissions from purchases made through links from this post.

1 thought on “Taming the Wild Beast”